The Predictions Were Right: In 2021, Ransomware will Physically Impact Operations

The Predictions Were Right: In 2021, Ransomware will Physically Impact Operations

The #1 prediction in OTORIO’s Industrial Cybercrime Impact Report and 2021 Predictions was that ransomware would physically impact production in 2021. Three months into this year, and we can sadly say those predictions have come true. 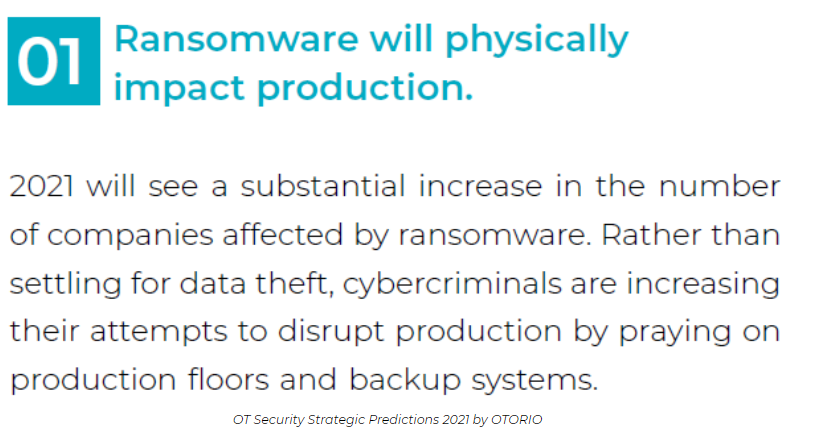 Since January, attackers managed to physically affect the operations of large manufacturing plants and critical infrastructure sites alike. Here are a few of the major operational disruptions caused by cyberattacks thus far in 2021:

Unlike IT networks, where attacks impact data, in operational (OT) networks - like those of WestRock, Oldsmar water treatment, Dax-Côte d’Argent hospital, and Molson Coors - attackers can take control over physical assets and cause severe damage ranging from production slowdown to substantial risk to human life.

IT solutions are not suitable for OT networks. They focus on post-infection detention and on mitigation steps that require downtime. Yes, even highly risk-aware industrial enterprises still focus primarly on IT solutions, also for the OT network. As a result, despite the clear and present danger, OT networks often remain unprotected.

The operational networks control the heart of industrial production and critical operations and are comprised of legacy systems and devices - some of which entirely lack modern cybersecurity capabilities. This makes OT networks more vulnerable to cyberattacks, and threat actors know this. Hackers target operations because they understand that – given the mission-critical nature of the systems under attack - they are more likely to get a ransom.

Manufacturers, industrial companies, and any organizations that rely on physical infrastructure to maintain business continuity should be prepared for the next cyberattack. By adopting industrial cybersecurity solutions that provide complete visibility over cybersecurity posture in the oft-neglected operational environment, OT security stakeholders can proactively apply feasible risk mitigation steps and make sure no one will shut down operations.